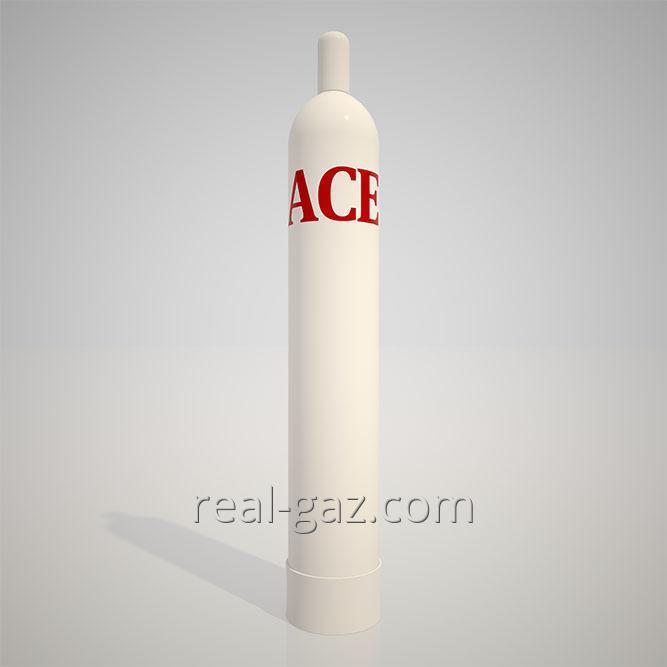 Acetylene (systematic name: etin) represents a chemical compound with a formula C2H2. It represents hydrocarbon and the simplest alkyne. It is the colourless gas which is widely used as fuel and the chemical construction block. It is unstable in pure form, and, thus, is usually processed in the form of solution. Pure acetylene has no smell, but commercial grades usually have the expressed smell because of impurity.

About 20 percent of acetylene are provided with the gas industry for autogenous gas welding and cutting because of high temperature of a flame; combustion of acetylene with oxygen makes a flame more than 3600 To (3300 °C, 6000 °F), release 11,8 kJ/g of Atsetileno-kislorod is the widespread fuel gas giving the greatest heat at combustion. Acetylene is the third hottest natural chemical flame after an acetylenedinitrile 5260 K (4990 °C, 9010 °F), and cyanogen 4798 K (4525 °C, 8180 °F). Oxygen-acetylene welding was very popular in the last decades; nevertheless, development and advantages of arc welding processes made gas-oxygen welding almost forgotten for many applications. Use of acetylene for welding considerably decreased. On the other hand, the oxygen-acetylene welding equipment quite flexible - not only because the torch is preferable to some types of welding of cast iron or steel (as well as in some art applications), but also because it easily gives in on rations, paykosvarka, metal heating (for annealing or training, a bend or formation), a loosening of the rusted nuts and bolts, and also other applications.

The Bell Canada equipment on repair of a cable still use torches with supply of portable acetylene as the soldering tool for sealing of lead plugs in hatches, and in some elevated places. Oxyacetylene welding can be also used in those areas where the electricity is not always available. Also, gas-oxygen cutting is still very popular and oxygen-acetylene cutting is used almost in all metal shops of a metalwork. For use when welding and cutting, working pressure has to be regulated by the regulator as it is higher than 15 pounds per square inch if is affected by a shock wave (the flame caused, for example, by the return blow), acetylene will decay with explosion in hydrogen and carbon.

Acetylene is not especially toxic, but when it is generated from calcium carbide, it may contain toxic impurity, such as traces of phosphene and an arsin which give it a pronounced garlick smell. Besides, easily ignites as the majority of light hydrocarbons, as a result of its use when welding. The greatest singular danger is connected with its internal instability, especially when it is under pressure: under certain conditions acetylene can enter exothermic reaction with formation of a number of products, as a rule, of benzene and/or vinylacetylene, perhaps, in addition to carbon fabrics and hydrogen. Therefore, acetylene if it is initiated having been affected by high temperature or a blast wave, can decay with explosion if absolute pressure in tires of gas exceeds about 200 kPa (29 pounds per square inch). The majority of regulators and manometers on the equipment specify excessive pressure and a safe limit for acetylene therefore makes 101 kPa or 15 pounds per square inch. Therefore it is transported and stored dissolved in acetone or a dimetilformamida (DMF), contained in a gas cylinder with porous contents (Agamassan) that does it safe for transportation and use, considering the appropriate address. Copper catalyzes acetylene decomposition and therefore acetylene should not be transported in copper pipes. The brass pipeline fittings also should be avoided.

We recommend to see
Acetylene
Bentonite
Minerals nonmetallic
Send inquiry
Buy
Contact supplier
Your question has been sent successfully
Consultants of the shop typically answer questions during the day.