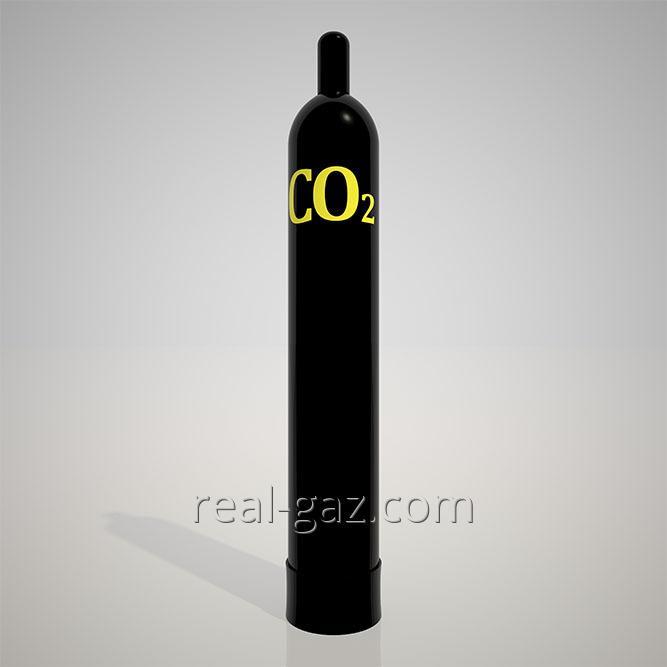 
Carbon dioxide (chemical formula C02) represents the natural chemical composition consisting of 2 atoms of oxygen, everyone is kovalentno connected by double communication with one atom of carbon. It represents gas at a standard temperature and pressure, and exists in the atmosphere of Earth in such state, as gas microimpurity at concentration 0,04 percent (400 parts on one million) on volume for 2014. Carbon dioxide is used in the food, oil, chemical industries.

Is one of the most often used compressed gases for pneumatic (gas under pressure) systems in portable tools. Carbon dioxide is also used as the atmosphere when welding though in a welding arch it reacts with oxidation of the majority of metals. Use in automotive industry is widespread, despite considerable proofs that the welded seams made in carbon dioxide are more fragile, than made in more inert atmospheres and that such welded seams worsen because of formation of coal acid eventually. It is used as welding gas first of all because it is much cheaper, than more inert gases, such as argon or helium. It is used in many consumer products which demand the compressed gas as it is inexpensive and nonflammable and therefore that it undergoes phase transition from gas to liquid at the room temperature with an achievable pressure about 60 bars (870 pounds per square inch, 59 atm) that allows considerably bigger amount of carbon dioxide to be located in this container, than would be otherwise. Life jackets often contain canisters of the compressed carbon dioxide for fast inflation. Aluminum capsules of CO2 are also on sale as the compressed gas for pneumatics, paintball markers, bicycle tires, and also for production of sparkling water. Fast evaporation of liquid carbon dioxide is used for production of explosive works in coal mines. High concentration of carbon dioxide can be also used against wreckers. Liquid carbon dioxide is used in supercritical drying of some foodstuff and technological materials, by preparation of samples for raster electronic microscopy and in five dekofeinization of coffee grains.

Carbon dioxide is also widely used as fire extinguishing substance in stationary fire protection systems for local application to concrete dangers and full flooding of the protected space. Standards of International Maritime Organization also recognize systems of carbon dioxide for fire-prevention protection of holds and an engine room. Fire protection systems on the basis of carbon dioxide were connected with death of several people because they can lead to asthma in rather high concentration. The review of the CO2 systems revealed 51 cases during the period between 1975 and date of the report therefore there were 72 death and 145 injuries.

Liquid carbon dioxide is good solvent for many lipophilic organic compounds and is used for removal of caffeine from coffee. Carbon dioxide drew attention to itself in pharmaceutical and other chemical industries as less toxic alternative of more traditional solvents, such as organochlorine connections. It is used by some dry-cleaners for this reason.

Carbon dioxide is used at oil production where it is entered in or near oil-extracting wells, as a rule, in superemergency conditions. Such approach allows to increase initial oil recovery due to decrease in residual oil saturation ranging from 7 percent to 23 percent in addition to primary production. He acts and as the forcing agent and when it is dissolved in underground crude oil, considerably reduces its viscosity, and, changing surface chemistry, allows oil flow more quickly via the tank to a removal well. In mature oil fields, extensive networks of pipelines are used for transportation of carbon dioxide to introduction points.

We recommend to see
Natural gas
Carbon dioxide
Send inquiry
Buy
Contact supplier
Your question has been sent successfully
Consultants of the shop typically answer questions during the day.