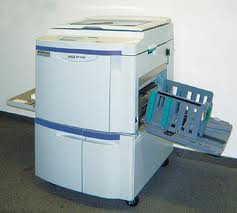 In stock
Reconfirm the price with seller
HALAL-P, Kompaniya
Azerbaijan, Baku
(View map)
+994
Display phones
Call
Products of other enterprises
Description
Risograph (digital duplicator) - the printer working by the principle of a rizografiya - a digital, rotational, stencil process.
The modern risographs added with the postprinting equipment (folders, cutting torches, laminators, stitchers, etc.), allow to create miniprinting houses - complexes of operational polygraphy. Besides, thanks to the high speed and low cost of the press, the risograph is irreplaceable for expeditious replication of documents in commercial, government institutions, the public, educational and religious organizations.
As prints a risograph.
Work of a risograph consists of two stages: production of a printing form (master film) and actually press. Important advantage of a risograph consists that both processes are automatically carried out within one compact device. At a master film fabrication stage the digital signal from the scanner or the computer (via the interface) arrives on a risograph thermohead which, according to it, burns the thinnest openings forming the image in a master film. Further the risograph places a master film on the printing wheel (the fulfilled master film automatically is removed to the special box) and impregnates it with paint from within. This stage takes from 11 to 30 seconds.
At a press stage the drum of a risograph is given to continuous rotation and paint through openings in a film is applied on paper on which the drum is rolled. Further paper gets to a reception tray.
Contact the seller
Risograph (digital duplicator)

We recommend to see
Office equipment
Risograph
Copiers
Send inquiry
Buy
Contact supplier
Your question has been sent successfully
Consultants of the shop typically answer questions during the day.